Sang Lee Farms of Peconic has been selected for New York’s inaugural AEM-Leopold Conservation Award (LCA). Awarded by the Sand County Foundation, in partnership with the Department of Agriculture and Markets, the AEM-LCA award honors Sang Lee Farms, along with the Suffolk County Soil and Water Conservation District, for their efforts to protect the environment through the preservation of soil and water quality while ensuring farm viability for future generations.

Sang Lee, one of Suffolk County’s largest vegetable farms, is owned and operated by father and son, Fred and William Lee. The family grows more than 100 varieties of specialty fruit and vegetables on their 97-acre certified organic farm. An early adopter of the AEM program, Sang Lee Farms uses modern technology and environmental best practices, including annual crop rotation to aid pest management, and inter-seeding of cover crops to suppress weeds, increase soil fertility, and to protect and conserve water resources. 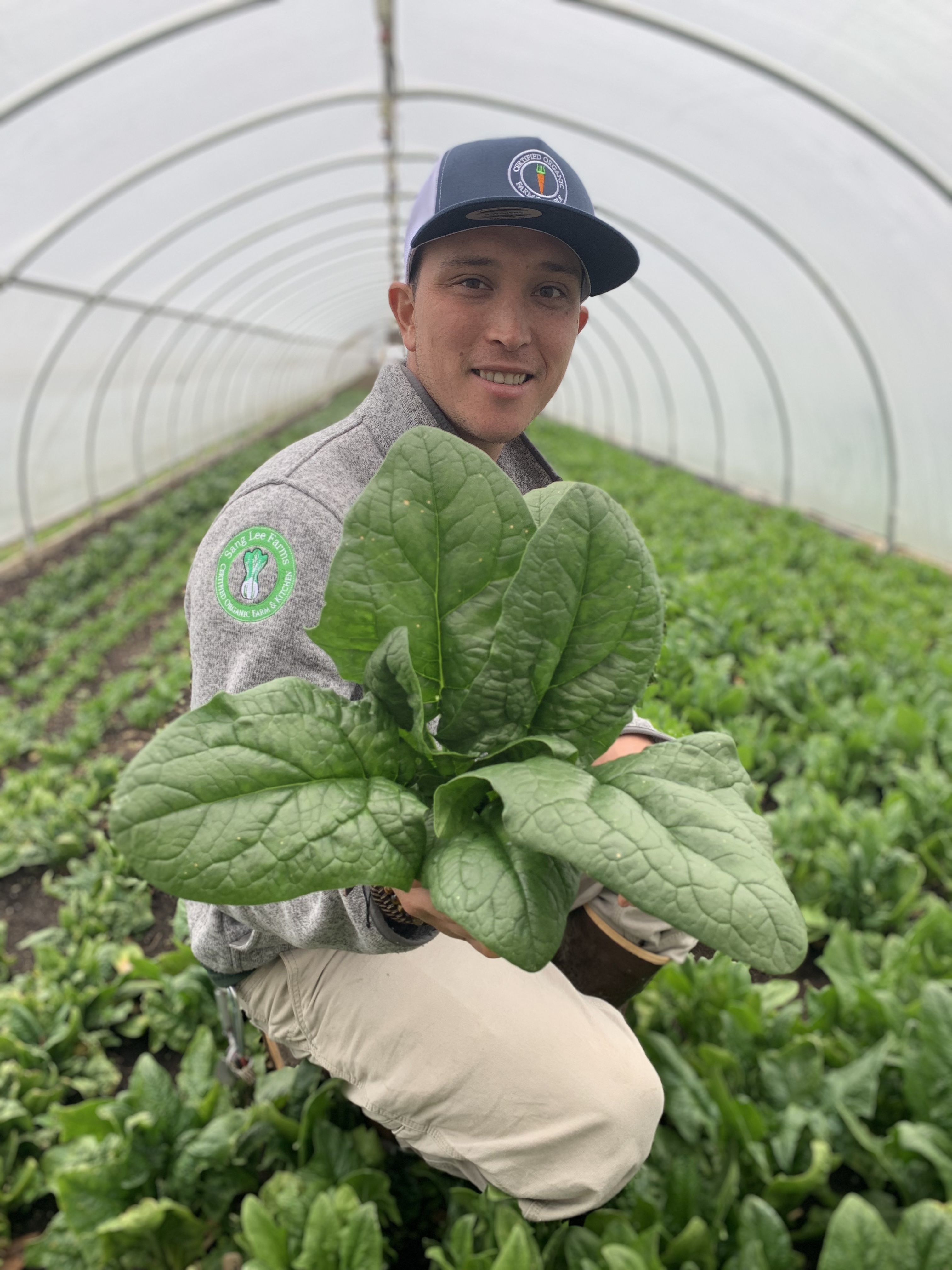 For the first time, New York’s longstanding Agricultural Environmental Management (AEM) Award has joined forces with the nationally recognized Leopold Conservation Award® program. Given in honor of renowned conservationist Aldo Leopold, the Leopold Conservation Award (LCA) recognizes farmers, foresters and other landowners across the U.S. who inspire others with their dedication to land, water, and wildlife habitat management on working land. The award is presented to landowners in 21 states.

Earlier this year, New York State Soil and Water Conservation Districts were encouraged to identify and nominate the best examples of conservation success in their district. Applications were reviewed by an independent panel of agricultural and conservation leaders.

Among the many outstanding landowners nominated for the award were finalists: Hemdale Farms and Greenhouses of Seneca Castle in Ontario County, and Honorone Farms of Canajoharie in Montgomery County.

NYS Agriculture Commissioner Richard A. Ball said, “On behalf of the Department and New York State, I congratulate Sang Lee Farms on receiving this esteemed award. The Lees have long been dedicated to caring for the environment, educating their Long Island neighbors about their work to grow healthy, fresh food, and giving back to their community. They have prioritized the conservation of the land, water and our wildlife to not only ensure the long-term viability of the farm but also to protect our natural resources for our future generations.”

William G. Lee, owner of Sang Lee Farms, said, “The Sang Lee Farms Family and farm staff have been inspired by the recognition from the Sand County Foundation. The commitment we hold to be stewards of the environment and the land we farm has been strengthened by the support in one of our most challenging seasons. We are pleased to carry the AEM Leopold Conservation Award torch this year and we will continue to manage our farmland and natural resources to the best of our ability for years to come. We hope that by joining this network of innovative farmers we can continue to learn and teach environmentally conscious food production practices to improve our long-term sustainability and local community health.”

Suffolk County Soil and Water Conservation District Agronomist Ann Marie Calabro said, “We are honored our application has been selected for this inaugural AEM LCA award. The Lee Family sets the bar far above the standard for conservation, farming organic, and providing top notch product to their community. Their willingness to try, innovate, and promote sound farming practices and land stewardship are demonstrated continuously in their efforts working with the Districts, partner agencies, community, and especially new farmers. There was no question in my mind who should be nominated for this award and we are grateful that Sang Lee Farms was recognized for the contribution and enrichment they bring to our county.”

John Piotti, American Farmland Trust President and Chief Executive Officer said, “Congratulations to the Lee family for winning the Leopold Conservation Award for their use of organic and regenerative practices on their Long Island vegetable farm. Their long-time commitment to soil improving conservation practices like cover cropping and field rotation and support for wildlife habitat sets them apart and deserves celebration.”

Sand County Foundation, a national nonprofit conservation organization, presents the $10,000 cash award to the Lee Farm through the support of American Farmland Trust, New York State Department of Agriculture and Markets, Cornell Cooperative Extension, The Ida and Robert Gordon Family Foundation, Gotham Bar and Grill, Farm Credit East, and the New York State Agribusiness Association. The farm will also be featured in a video that promotes their award-winning conservation practices.

Sang Lee Farms is one of Suffolk County’s last large vegetable farms. Located in the heart of Long Island’s wine country, it is a landmark for its beauty, uniqueness and diversity.

More than 100 varieties of specialty vegetables, including Chinese cabbages, greens, and radishes, are organically grown with a hybrid approach that mixes age-old mechanical cultivation with forward-thinking technology.

The farm’s management is transitioning from Fred Lee to his son William and his partner Lucy. The farm’s story began when Fred’s father and uncles began raising produce to supply New York City’s Chinatown in the 1940s. They first farmed elsewhere on Long Island. After the passing of some family members, Fred moved his operations to Peconic in 1987. He found eastern Long Island offered a moderate climate with an extended growing season, and fertile, well-drained sandy loam soils.

For more than 70 years, the Lees have strived to improve their farming and conservation practices with each growing season. As early adopters of New York’s Agricultural Environmental Management program, their creative use of cover crops has helped them meet their goal to achieve a regenerative form of agriculture—one that increases soil fertility, builds organic matter, suppresses weeds and eliminates erosion.

Each field at Sang Lee Farms is surrounded by a buffer zone of untilled cover crops. Half to 75 percent of every field is left uncultivated after each growing season. Longer rest periods can break the repopulation of certain weeds while restoring soil health. Strips of cover crops have also provided habitat for wildlife. Instead of using insecticide, the Lee family releases beneficial insects onto fields. Likewise, they encourage habitat for helpful predators by hanging bat houses, barn owl boxes and blue bird houses.

In addition, most of their irrigation has been upgraded to a micro-drip system that conserves hundreds of thousands of gallons of water each growing season.

Sang Lee Farms donates to local food banks and hosts field days to demonstrate the benefits of reduced tillage and composting. The Lees also offer mentorship assistance and advice to new and small farms on the successes and failures of organic practices and weed control.

The hard-working people who make up Sang Lee Farms have a deep respect for the land, nature, their employees, their neighbors, and their community, and their family’s values are reflected in their land stewardship.

New York State’s AEM framework is a model for the nation as a voluntary, incentive-based approach to protect natural resources and meet the economic needs of the agricultural community.