Choiniere Family Farm of Highgate Center, Vermont has been selected as the recipient of the 2021 New England Leopold Conservation Award®.

Given in honor of renowned conservationist Aldo Leopold, the prestigious award recognizes those who inspire others with their dedication to land, water and wildlife resources in their care. Dairy farmers Guy and Beth Choiniere receive $10,000 and a crystal award for being selected.

“As the national sponsor for Sand County Foundation’s Leopold Conservation Award, American Farmland Trust celebrates the hard work and dedication of the New England recipient,” said John Piotti, AFT President and CEO. “At AFT we believe that conservation in agriculture requires a focus on the land, the practices and the people and this award recognizes the integral role of all three.”

“The Choinieres embody so much of the ethos and practice that Aldo Leopold taught and modeled, for generations,” said Spencer Meyer, Senior Conservationist at the Highstead Foundation. “I cannot think of a more fitting way to celebrate two inspiring legacies than by recognizing the Choiniere Family Farm with the 2021 Leopold Conservation Award.”

“We are pleased to present this award to Guy Choiniere and the Choiniere Family Farm. I am thrilled that a dairy farm so devoted to conservation agriculture, and improving water quality has been chosen as the first New England Leopold Conservation Award recipient from Vermont,” said Nathan L’Etoile, New England Director of American Farmland Trust. “Not only does Choiniere Family Farm hold itself to a high standard, but Guy devotes his own time to teach tomorrow’s watershed stewards, elementary school students around Lake Champlain, the importance of conservation practices to keeping our lakes and rivers clean.”

Earlier this year, owners of forestland and farmland in Connecticut, Maine, Massachusetts, New Hampshire, Rhode Island and Vermont were encouraged to apply (or be nominated) for the award. Applications were reviewed by an independent panel of agricultural and forestry conservation leaders.

Sand County Foundation presents the Leopold Conservation Award® annually in 23 states with a variety of conservation, agricultural and forestry organizations. For more information on the award, visit www.leopoldconservationaward.org.

While navigating changes in the farm economy, climate and farming practices, the Choiniere Family Farm has become a model of innovation and adaptability for other New England dairies.

Located four miles from Quebec, Canada, Choiniere Family Farm’s 242 acres of farmland and 70 acres of woodland is crossed by the Rock River and its tributaries. Soil health and erosion control practices have kept the farm productive and resilient despite an increase in severe storms, rainfall and periods of drought in northwest Vermont.

Guy’s parents, Henry and Raymonde, placed a conservation easement on the farm and sold its development rights before transferring it to him and his wife Beth in the 1990s. A generation later, Guy and Beth’s children, Matt and Hannah, farm with them. The Choinieres sell beef, milk, pork, chicken, eggs, honey and baked goods at a store located on their farm.

Prompted by an unstable market for conventional milk in the 1990s, Guy studied and then transitioned to organic production. It’s a move he said was good for his cows, land and bottom line. A few years later he seeded 25 acres of corn to permanent hay and pasture in order to convert his herd to 100 percent grass-fed. That move fetched an even better price for their organic milk.

After taking over the farm, Guy also began addressing environmental issues with assistance from the USDA’s Natural Resources Conservation Service. The conservation plan he developed remains a work in progress today.

To prevent soil erosion and improve water quality, the Choinieres planted 5,000 trees along banks of the impaired Rock River. They also conveyed a 51-acre river corridor easement that designates an area where the river can meander naturally. The land can still be farmed, but the river will not be dredged. There is also a permanent 50-foot naturally vegetated buffer along 12,000 feet of the river’s bank.

Keeping nutrients on the farm and out of the river was also aided when Guy switched from conventional liquid manure storage to an innovative compost bedded pack system. During the winter the cows are fed hay in large hoop barns designed to mimic the comfort and atmosphere of being on pasture. Excess hay provides bedding and catches manure before being trod down into compost. When the cows resume rotational grazing in May, pigs are let into the barns to root around and expedite the composting process before it is spread on fields as nutrient-rich fertilizer. Guy is an ambassador to help other dairies manage bedded pack systems.

Guy is also an instructor for the Champlain Basin Watershed Initiative. This partnership between Vermont, New York and Quebec educates elementary school teachers participating in a course called A Watershed for Every Classroom. The teachers are then equipped to teach their students – future stewards of Lake Champlain -- how agricultural conservation practices address water quality issues. 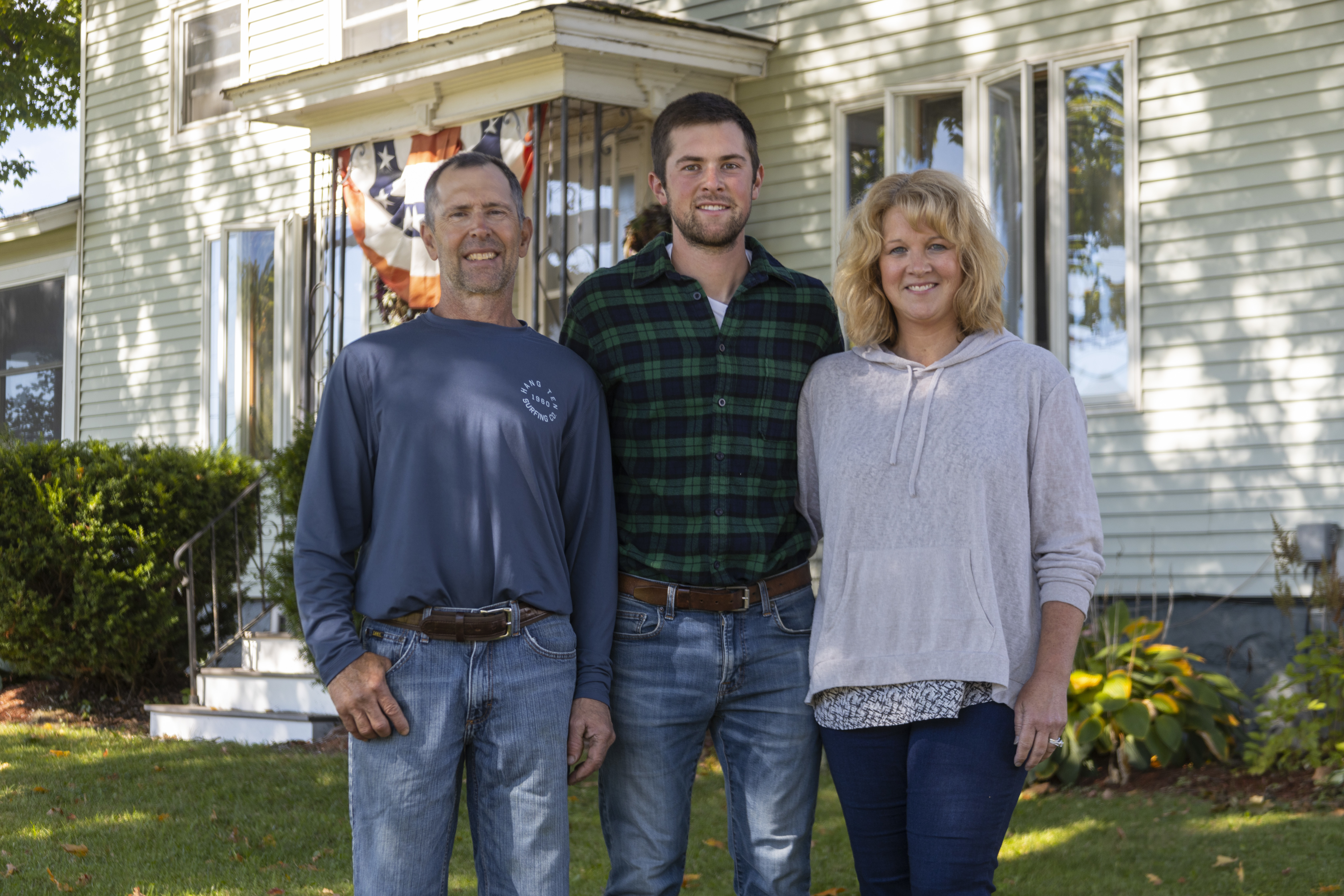 Wildlands, Woodlands, Farmland & Communities is an ambitious vision for New England that is rooted in science and is focused on securing a healthier, more livable planet for all. The WWF&C vision calls on the region to conserve 70 percent of New England as forests and at least 7 percent as farmland. It is being advanced by a wide range of partners and committed individuals and organizations, including WWF&C co-leaders, Highstead and The Harvard Forest, Harvard University. www.wildlandsandwoodlands.org