F.L. Sipes Farms of Ekron is the recipient of the 2021 Kentucky Leopold Conservation Award®.

The prestigious award, given in honor of renowned conservationist Aldo Leopold, recognizes extraordinary achievement in voluntary conservation and management of natural resources by American farmers, ranchers and foresters in 23 states.

Fred L. Sipes, who received $10,000 and a crystal award for being selected, accepted the award at the Kentucky Association of Conservation Districts’ 77th Annual Meeting in Lexington.

Sipes implemented a rotational grazing program and other conservation practices to reduce soil erosion and improve water quality at his crop and beef cattle farm in Meade County.

“The Kentucky Agricultural Council is proud to once again partner with the Sand County Foundation, American Farmland Trust and the Kentucky Association of Conservation Districts to recognize exceptional stewardship and conservation practices among Kentucky’s many private landowners,” said Mark Barker, Kentucky Agricultural Council’s chair. “The winner of the 2021 Leopold Conservation Award represents lifelong work in his community to promote good stewardship and his passion for agriculture in Meade County.”

“KACD and conservation districts promote the sound management of all our natural resources and we are excited to join Sand County Foundation, American Farmland Trust and the Kentucky Agricultural Council in recognizing these well deserving landowners in Kentucky,” said Shane Wells, Kentucky Association of Conservation Districts President. “The Association and conservation districts work daily to assist private landowners in their efforts to adopt sound soil and water conservation practices on their land that benefit us all. This year’s Kentucky Leopold Conservation Award recipient is a true working family farm with a strong land stewardship ethic.”

“Recipients of this award are real life examples of conservation-minded agriculture,” said Kevin McAleese, Sand County Foundation president and CEO. “These hard-working families are essential to our environment, food system and rural economy.”

“As the national sponsor for Sand County Foundation’s Leopold Conservation Award, American Farmland Trust celebrates the hard work and dedication of the Kentucky recipient,” said John Piotti, AFT president and CEO. “At AFT we believe that conservation in agriculture requires a focus on the land, the practices and the people and this award recognizes the integral role of all three.”

Among the many outstanding Kentucky landowners nominated for the award were finalists: Reddick Farms of Bardwell in Carlisle County, and Donald Veatch of Campbellsville in Marion County.

The 2020 recipient was JRS Angus Farm and its owner, James R. ‘Buddy’ Smith, of Lawrenceburg in Anderson County.

Fred began growing 50 acres of burley tobacco, fresh out of high school in 1994. Even then, conservation was important to him. He knew consistent improvement and diversification would be critical to his farm’s survival.

As he acquired and rented more land to raise beef cattle and grow soybeans, corn, wheat, produce and hay, he adopted conservation practices with assistance from the Natural Resources Conservation Service. Determined to leave the land and water better than he found it, he joined the Meade County Conservation District’s board, and was an early adopter of a Kentucky Agriculture Water Quality Plan.

Fred established a rotational grazing system with cross fencing for his cattle. Watering facilities and feeding pads were constructed to prevent erosion. The herd’s calving season is managed to coincide with ample forage availability and avoid over-grazing. Pastures with native grasses and wildflowers, riparian buffers, and new and repaired grass waterways slow erosion of topsoil while providing habitat for wildlife, aquatic life and insect pollinators.

Fred credits no-till practices and cover crops with improving the health of his soil. Cover crops of wheat and rye hold soil in place over the winter and spring. When the cover crops are terminated in the spring, they return organic matter to the soil which nourishes that year’s soybean and corn crops. Cover crops also help reduce a field’s compaction.

Fred has installed and repaired several waterways, including one on a farm he purchased in 2020. It’s one of the improvements he’s made since receiving a regional American Soybean Association Conservation Legacy Award in 2019.

Like many farmers, Fred rents some of his cropland from other landowners. He views his landlords as partners, and therefore keeps them informed on crop conditions and conservation improvements, and maintains their fencerows.

Just as Aldo Leopold wrote about the “ethical relationship between people and the land that they manage,” Fred is inspired to share his conservation story with consumers. He does so through leadership positions with the Kentucky Soybean Association and Meade County Farm Bureau. He also organizes and hosts field days sponsored by the University of Kentucky Extension Service and local conservation district.

“He exemplifies who today’s farmer should be – eager to learn and serve. And more excited to educate others about what he has learned,” said Andy Mills, Meade County Extension agent.

Fred and his wife, Stacey, are parents to four-year-old twins, Joe and Sam. Parenthood has made him even more conscious of the environmental footprint he’ll leave on the land.

“There is nothing more important to me than preserving and improving the land for these boys,” he said. 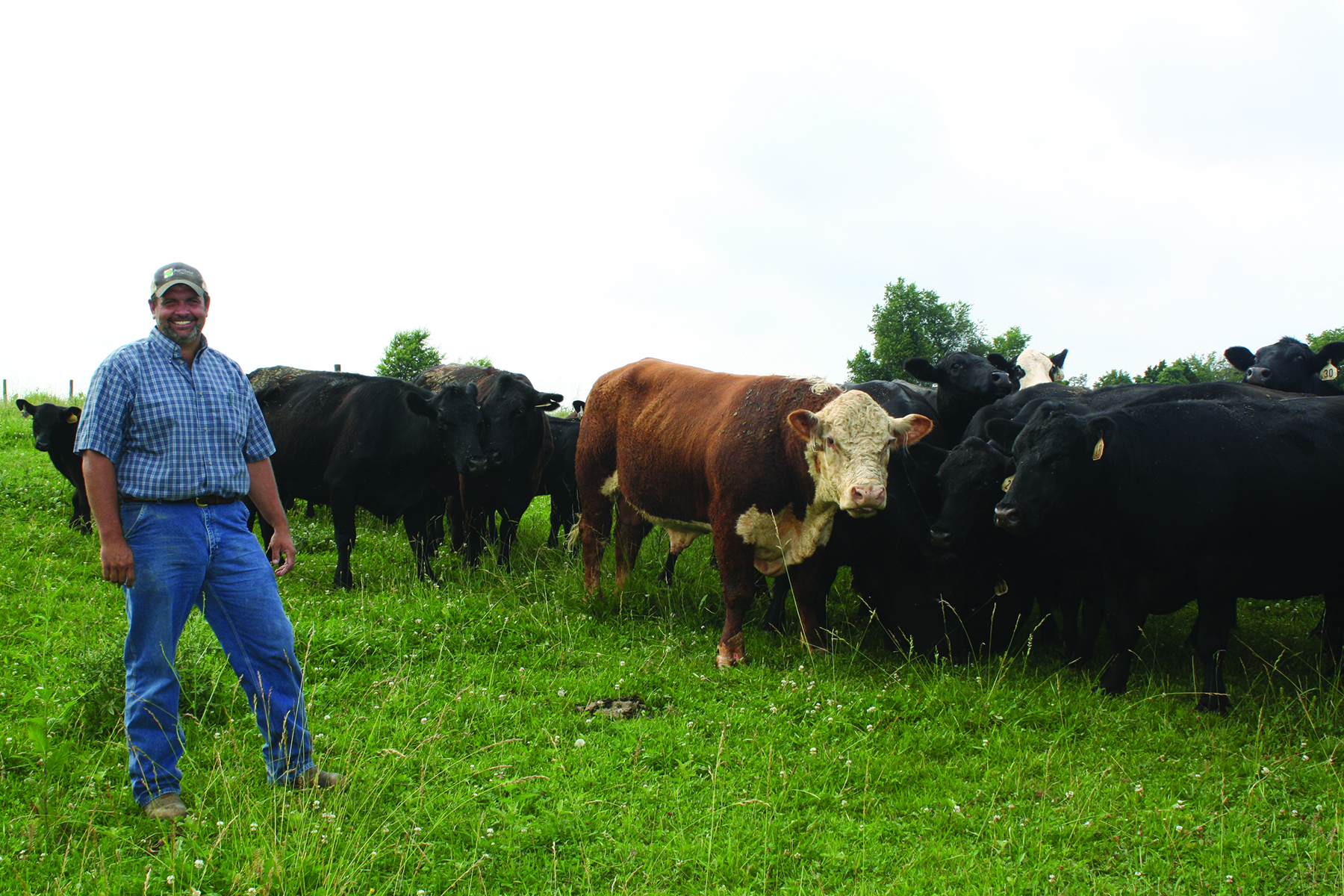