LINCOLN – Switzer Ranch of Loup County has been selected as the recipient of the 2021 Nebraska Leopold Conservation Award®.

In Nebraska, the award is presented annually by Sand County Foundation, American Farmland Trust, Alliance for the Future of Agriculture in Nebraska (AFAN), Cargill and the Nebraska Environmental Trust.

Bruce and Sue Ann Switzer along with their children, Sarah Sortum and Adam Switzer, own and operate Switzer Ranch. They were announced as the recipients by Governor Pete Ricketts in advance of Earth Day. The Switzers will be presented with the $10,000 award during a ceremony honoring them later this year.

“As Nebraska agriculture continues its excellent work in balancing the need for clean air, water, and managing wildlife habitat with the demand for economically sustainable food production, it is inspiring to know the Switzer family has been doing it for generations,” said Steve Martin, Alliance for the Future of Agriculture in Nebraska (AFAN) Executive Director. “They manage their ranch in a way which benefits the cattle, bird habitat, and agri-tourism all at the same time.”

“Cargill understands sustainable beef starts on the ranch. The Switzer family dovetails productive ranch practices to benefit the prairie bird population and their business, making them sustainable into the future” said Sammy Renteria, general manager of Cargill in Schuyler. “We salute their devotion to productive ranching while providing quality habitat for wildlife in Loup County and Taylor.”

“The Switzer Ranch has demonstrated how an active ranch can diversify and be successful at raising cattle, involve multi-generations, protect wildlife, improve grazing and habitat, and operate a thriving tourism business,” said Mark Brohman, Nebraska Environmental Trust Executive Director. “Sarah and her family have grown Calamus Outfitters into a premier nature-based operation that showcases central Nebraska to the world and is very deserving of the Leopold Conservation Award.”

“As the national sponsor for Sand County Foundation’s Leopold Conservation Award, American Farmland Trust celebrates the hard work and dedication of the Nebraska recipient,” said John Piotti, AFT President and CEO. “At AFT we believe that conservation in agriculture requires a focus on the land, the practices and the people and this award recognizes the integral role of all three.”

Last year, Nebraska landowners were encouraged to apply (or be nominated) for the award. Applications were reviewed by an independent panel of agricultural and conservation leaders.

The 2020 recipient was Ed and Leta Olson of Craig, Nebraska.

ABOUT THE SWITZER RANCH

Sarah Sortum and Adam Switzer are siblings and fourth-generation ranchers committed to the stewardship of Switzer Ranch.

They express a land ethic passed down from their parents, Bruce and Sue Ann Switzer, by implementing agricultural conservation practices and connecting others with nature.

“Our focus really started to shift from being solely a cow-calf operation to being an operation (with) biodiversity goals about 12 years ago,” Sarah said.

To accomplish these goals the Switzers used the ecological processes that helped shape the Great Plains: fire and grazing. A huge motivator for the family was the rapidly disappearing habitat of native prairie grouse.

“At the time, we didn’t realize the plight that grassland birds were in,” she recalls. “If this is their last stronghold, we have got to step up and make sure we provide what they need to survive.”

With assistance from Audubon Nebraska and the World Wildlife Fund, the Switzers learned about bird counting, bird behavior, and other details about the greater prairie-chicken and sharp-tailed grouse. They realized small changes to their ranch management plans could make a big difference for these resident birds that don’t migrate elsewhere.

The Switzers located (and documented with GPS technology) the birds’ breeding grounds on the ranch. This helped prioritize which areas to target for removal of invasive species that threaten bird habitat. With a lifespan of about five years for the prairie chicken, the Switzers wanted to be sure they quickly focused on the right pockets of the ranch.

“A lot can happen in five years, as far as damaging a whole generation of birds,” Sarah said.

The Switzers received cost-share from the Sandhills Task Force and Nebraska Game and Parks for invasive tree removal and prescribed burns. With support from local Natural Resources Conservation Service staff, they installed wildlife-friendly fencing, added wildlife escape ramps in their watering tanks, and implemented bird and wildlife-friendly haying practices. Land along the Calamus River was placed in a conservation easement with The Nature Conservancy.

The Switzers have met the biodiversity goals they set out to achieve 12 years ago with the use of fire and rotational grazing. They showed that ranchers can create bird and wildlife habitat, while improving water quality, soil health and root systems in the environmentally-sensitive Sandhills.

Not only did their efforts lead to an uptick in bird watchers visiting the ranch, but when Audubon Nebraska designated the ranch as an Important Bird Area, it was among the first private properties in Nebraska with that designation.

Always looking to connect others to the importance of grassland bird habitat, the Switzers even played host to a fun and educational Prairie Chicken Festival.

Resiliency is defined on some ranches as the conservation of natural resources. For others it’s ensuring future economic viability. At Switzer Ranch these attributes go hand in hand. 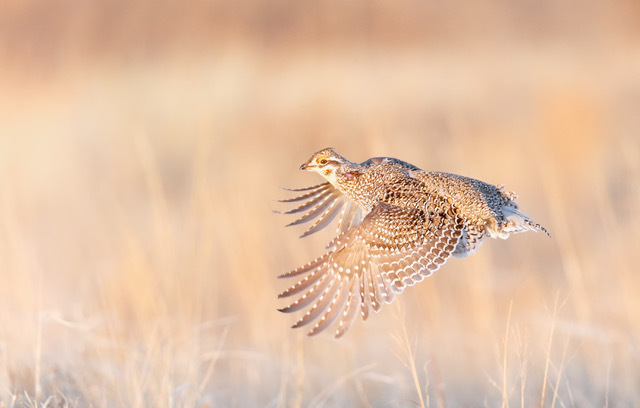 SAND COUNTY FOUNDATION inspires and enables a growing number of private landowners to ethically manage natural resources in their care, so future generations have clean and abundant water, healthy soil to support agriculture and forestry, plentiful habitat for wildlife and opportunities for outdoor recreation. www.sandcountyfoundation.org

AFAN (Alliance for the Future of Agriculture in Nebraska) was formed in 2005 by the leading agricultural organizations in Nebraska to support and grow the livestock industry. Growing the livestock industry adds value to Nebraska’s abundant feedstuffs and creates economic opportunities on farms and ranches and in rural communities. AFAN provides one-on-one services to producers to help them understand opportunities, works with companies to help overcome challenges, and supports the recruitment of ag-based businesses. AFAN works with our partners to inform consumers about where their food comes from. Developing a vital rural economy is the overarching goal of AFAN. https://becomeafan.org.

CARGILL provides food, agriculture, financial and industrial products and services to the world. Together with farmers, customers, governments and communities, we help people thrive by applying our insights and 150 years of experience. We have 149,000 employees in 70 countries who are committed to feeding the world in a responsible way, reducing environmental impact and improving the communities where we live and work. We are passionate about our goal to be the global leader in nourishing people and operating responsibly across the agricultural, food, industrial and financial markets we serve. https://www.cargill.com/

THE NEBRASKA ENVIRONMENTAL TRUST was established in 1992 to conserve, enhance and restore the natural environments of Nebraska. It was created on the conviction that a prosperous future is dependent upon a sound natural environment and that Nebraskans could collectively achieve real progress on real environmental issues if seed money were provided. https://environmentaltrust.nebraska.gov/