Four finalists have been selected for the prestigious 2022 Missouri Leopold Conservation Award®. Given in honor of renowned conservationist Aldo Leopold, the award recognizes farmers, ranchers and forestland owners who inspire others with their dedication to land, water and wildlife habitat in their care.

“The finalists for this year’s Leopold Conservation Award are excellent examples of family farms exhibiting the highest level of conservation,” said Scott Edwards, NRCS State Conservationist. “The commitment they have made to implement conservation and improve their operations is a true success story.”

“As farmers, we continually strive to improve production practices through innovation and stewardship to raise healthy crops,” said Missouri Corn Merchandising Council Chairman Clint Stephens. “Some years are tougher than others, but it’s playing the long game to leave the land in better shape for future generations. The efforts farm families make to improve conservation and stewardship are commendable. We congratulate this year’s nominees for the prestigious Missouri Leopold Conservation Award.”

Earlier this year, Missouri landowners were encouraged to apply, or be nominated, for the award. Applications were reviewed by an independent panel of agricultural and conservation leaders.

“In agriculture, our greatest resource is the land, and as farmers, it is our duty to be good stewards of that land for future generations,” said Aaron Porter, chairman of the Missouri Soybean Merchandising Council. “Sustainability is one of the top priorities for the Missouri Soybean Merchandising Council, and it’s outstanding to see the spotlight on farm families who are truly living the example of stewardship.”

· Rick Aufdenberg of Jackson in Cape Girardeau County: The Rick and Renee Aufdenberg family has been growing corn, soybeans, wheat and beef cattle for 45 years. To reduce erosion and improve soil health they have used a no-till system on their fields since 2010. Planting a mix of cover crops has enhanced yields for subsequent crops. Parts of the farm that were converted from grassland to crops decades ago have been switched back to grasslands, allowing the Aufdenbergs to rotationally graze more cattle. These changes have benefitted water quality and increased wildlife populations.

· Britt Farms, Inc. of Clifton Hill in Randolph County: Ryan Britt and family are corn, soybean and wheat growers who utilize cover crops and no-till practices to prevent erosion and improve soil health. Grid sampling and variable rate fertilizer application technologies are used to protect soil nutrients and prevent the overuse of fertilizer. Their family uses a covered feeding facility in the winter, and rotationally grazes beef cattle in the summer to preserve water and grass resources. Britt Farms has provided habitat for wildlife and insect pollinators on wetlands and along field buffers.

· Stanton Farms of Centralia in Boone County: Stanton Farms consists of two farms: a row crop, hay and beef farm owned by Andrew and Judy Stanton, and a free-range egg operation on 180 acres owned by Dustin and Austin Stanton. The Stantons utilize cover crops to preserve topsoil. They use terraces to control erosion from rainwater. The rotation of their chicken flocks naturally returns nutrients to the soil. They’ve hosted numerous tours for students, legislators and even the CEO of Facebook.

“These Missouri family farms exhibit a deep understanding and commitment to future generations and sustainability,” said Missouri Farmers Care Chairman Jeff Houts. “As so many things in agriculture are constantly changing, these finalists understand that focused strategies for enhancing the land and water are forever at the root of defining success.”

The inaugural recipient of the Missouri Leopold Conservation Award® in 2017 was presented to Uptown Farms in Laclede. The 2018 recipient was Scherder Farms in Frankford. The 2019 recipient was Brinker Farms Inc. in Auxvasse. The 2020 recipients were Joshlin and Addie Yoder in Leonard. The 2021 recipient was Oetting Homestead Farms in Concordia.

This year’s recipient will be announced in November at the Missouri Association of Soil and Water Conservation Districts Annual Training Conference in Osage Beach, Missouri.

“As the national sponsor for Sand County Foundation’s Leopold Conservation Award, American Farmland Trust celebrates the hard work and dedication of the Missouri award finalists,” said John Piotti, AFT President and Chief Executive Officer. “At AFT we believe that conservation in agriculture requires a focus on the land, the practices and the people and this award recognize the integral role of all three.”

In his influential 1949 book, A Sand County Almanac, Leopold called for an ethical relationship between people and the land they own and manage, which he called “an evolutionary possibility and an ecological necessity.” Sand County Foundation presents the Leopold Conservation Award to private landowners in 24 states with a variety of conservation, agricultural and forestry organizations. 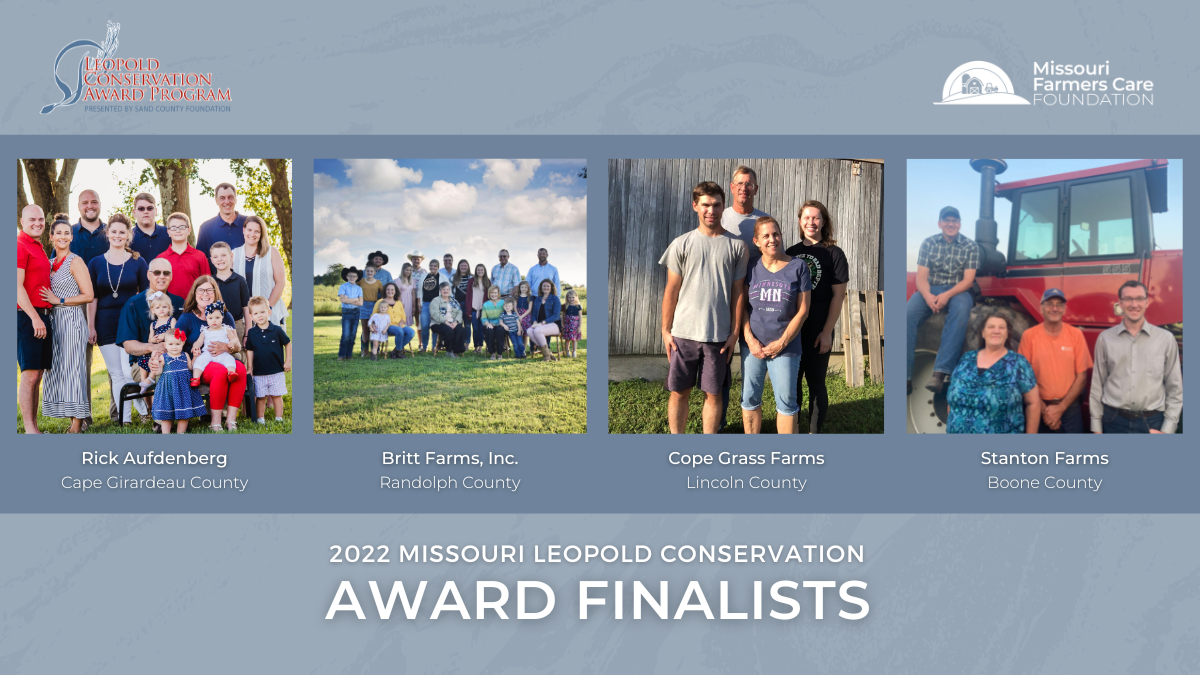 SAND COUNTY FOUNDATION inspires and empowers a growing number of private landowners to ethically manage natural resources in their care, so future generations have clean and abundant water, healthy soil to support agriculture and forestry, plentiful habitat for wildlife and opportunities for outdoor recreation. www.sandcountyfoundation.org.

MISSOURI FARMERS CARE FOUNDATION enables Missourians to understand the influence and importance of agriculture in their daily lives by serving as the centralized hub of the unified educational programs, awards, and hunger relief efforts of Missouri's agricultural community. www.MOFarmersCare.com