AUSTIN – At a time when the great grasslands of South Texas face threats such as land ownership fragmentation and non-native invasive grasses, Laborcitas Creek Ranch shines as a beacon, bucking the trends by adding acreage under conservation and diligently restoring native habitat to benefit diverse wildlife, from game animals to waterfowl and more.

These are reasons why, on May 17, Laborcitas Creek Ranch received $10,000 along with a Leopold Conservation Award crystal at the 23rd Lone Star Land Steward Awards dinner in Austin. This award is given in honor of renowned conservationist Aldo Leopold, and conferred each year by Sand County Foundation, a nonprofit organization devoted to private land conservation, in partnership with the Texas Parks and Wildlife Department. In Texas, the Leopold Conservation Award program is sponsored by Lee and Ramona Bass.

Since 1996, Texas Parks and Wildlife Department has hosted the Lone Star Land Steward Awards to recognize private landowners for habitat management and wildlife conservation. In addition to the statewide Leopold award, multiple eco-region recipients are acknowledged in various parts of the state.

A primary purpose of the award is to elevate outstanding landowners who can serve as a positive example to other ranchers and landowners, and to demonstrate how good land management practices can be both profitable and ecologically sustainable.

Laborcitas Creek Ranch is in Brooks County, four miles west of Falfurrias. In fact, the property was once known as the Miller and La Mota Ranch starting in the late 1800’s, and it was the original town site of Falfurrias before the railroad came through and the town moved.

In 1990, current owners Berdon and Rolanette Lawrence began their loving relationship with this landscape, and have since won multiple awards for restoring it. After a decade of leasing the property they purchased it in 2001 and renamed it Laborcitas Creek Ranch. Today the ranch includes 16,000 acres of mostly classic brush country but also 40 acres of valuable wetlands.

Like other Leopold winners before them, the ranch demonstrates how wildlife, water and land conservation can go hand in hand with traditional ranch activities like cattle. One of their key management strategies is grazing control. By allowing native grasses to recover, they not only improved water quantity and quality, but this also provides critical nesting habitat for bobwhite quail and Rio Grande turkey and protects white-tailed deer fawns with cover from predators.

“What we enjoy here most of all is supporting the wildlife,” said Berdon Lawrence. “When we first came down here, this property had been overgrazed, and there weren’t many quail or deer. Now, we really enjoy seeing all the different kinds of wildlife. We enjoy hunting, and occasionally having a tasty and healthy meal of game, but mostly we just like to see them and protect them. We’re real proud that we’ve been able to turn this ranch back into a wildlife paradise.”

Prescribed burning in winter is a valuable tool used to promote seed producing plants, insect habitat, and lush green areas used by many bird species and large mammals. This goes alongside using bulldozers and roller choppers to control dense brush, leaving mottes in places to create quail habitat, and using winter disking, which benefits not only quail but also turkey, mourning and white-winged dove, and many other bird species.

“I can remember the first time I came down here,” said Rolanette Lawrence. “Because the property had been overgrazed, the deer were very small and their antlers were small. Now, over the years, we’ve made this a better place. The deer are bigger, healthy and thriving, along with all the birds and other wildlife. Every day the beauty changes—a new flower, a newborn fawn, or just something moving through, like right now the hummingbirds are migrating through.”

In 2007, the ranch implemented a new strategy of managing pastures that had become densely matted with bunch grasses using what they call the Quailerator. This modified pasture aerator reduces vegetation density, but leaves enough cover for deer fawns and quail and turkey nesting.

“I love hearing the quail,” said Rolannette, “and when they sing to each other it’s like a love song. And this is the time of year that they’re pairing up and really singing.”

Laborcitas Creek Ranch has also developed 15 wetland ponds for waterfowl throughout the ranch, including transforming some coastal grazing pastures into wetlands to create lush green browse and to attract insects and invertebrates for many types of waterfowl. Planting and irrigation have also brought many benefits, including installing 18 irrigation pivots utilized not only by dove, but also by quail, waterfowl and other birds.

“The plan is to better the land,” said Rolanette. “Hopefully, we can make this land a better place for our children and our grandchildren.”

High definition VIDEOS of Laborcitas Creek Ranch and all other award recipient ranches is on the department’s official YouTube Channel. 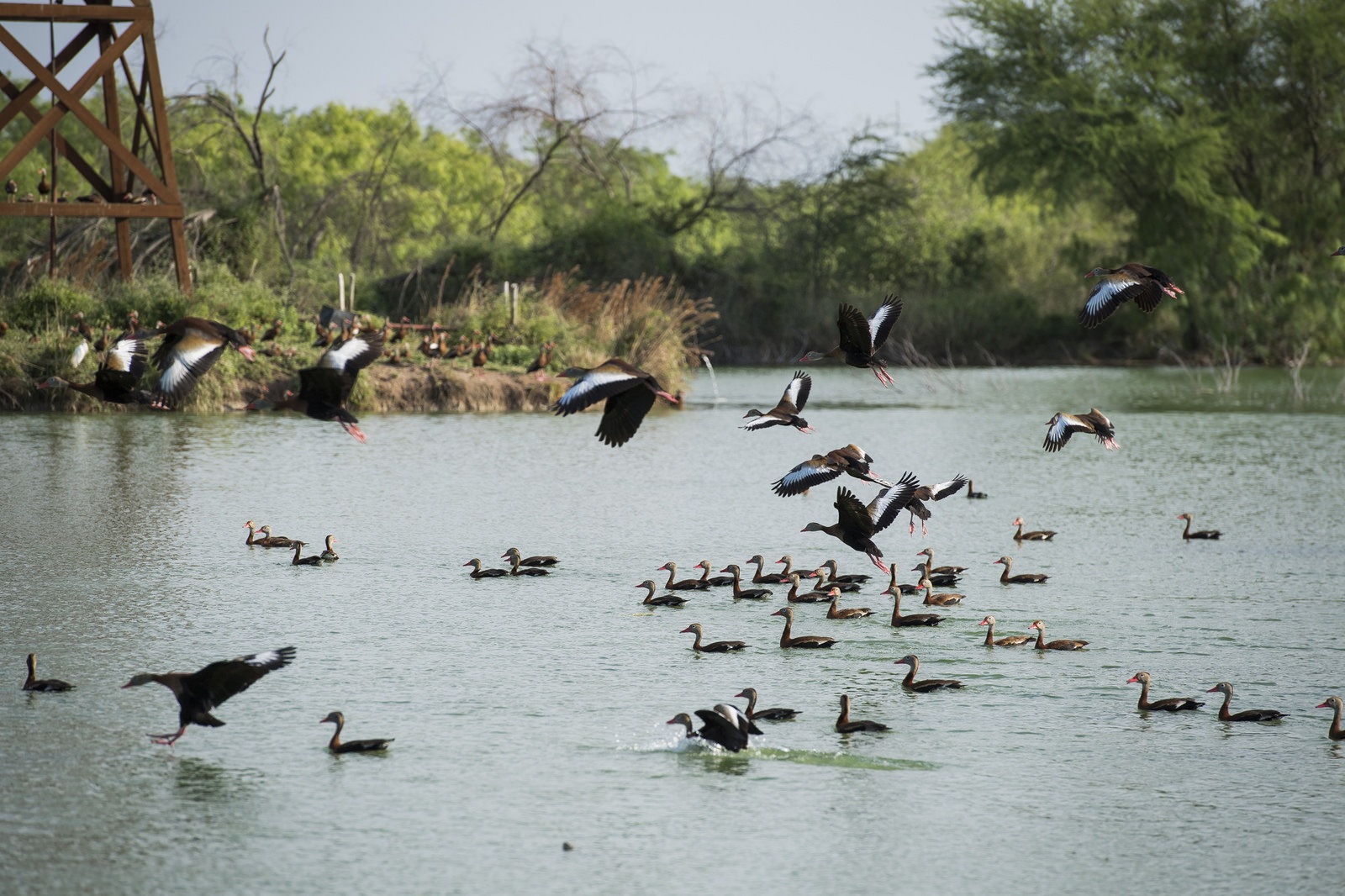