Wine Glass Ranch of Imperial has been selected as the recipient of the 2022 Nebraska Leopold Conservation Award®.

Sand County Foundation and national sponsor American Farmland Trust present the Leopold Conservation Award to private landowners in 24 states for extraordinary achievement in voluntary conservation. In Nebraska, the $10,000 award is presented with Alliance for the Future of Agriculture in Nebraska (AFAN), Cargill and the Nebraska Environmental Trust.

Logan and Brianna Pribbeno, and his parents Jeff and Connie Pribbeno, own and operate the 30,000 acres of crops, rangeland, and grazing lands at Wine Glass Ranch. The Pribbenos will be presented with the $10,000 award at the AFAN annual meeting in November.

“Agriculture has to be economically sustainable along with environmentally sustainable in order to function. The face that the Pribbenos have been tending this land for five generations is a testament to their big picture view of sustainability,” said Steve Martin, Alliance for the Future of Agriculture in Nebraska (AFAN) Executive Director. “They are a great example of how conservation practices can enhance modern farming and ranching practices for greater profitability while also improving the land. Congratulations to the Pribbenos of Wine Glass Ranch on a well-deserved award.”

“As the national sponsor for Sand County Foundation’s Leopold Conservation Award, American Farmland Trust celebrates the hard work and dedication of the Nebraska recipient,” said John Piotti, AFT President and CEO. “At AFT we believe that conservation in agriculture requires a focus on the land, the practices and the people and this award recognizes the integral role of all three.”

Last year, Nebraska landowners were encouraged to apply (or be nominated) for the award. Applications were reviewed by an independent panel of agricultural and conservation leaders.

The first Nebraska Leopold Conservation Award was presented to Wilson Ranch of Lakeside in 2006. The 2021 recipient was Switzer Ranch of Loup County. To view profiles of award recipients visit www.sandcountyfoundation.org/Nebraska.

Logan Pribbeno grew up around rotational grazing and no-till farming in the 1990s when both practices were still hotly debated by academics and farmers alike. Today, the self-described “second-generation conservationist” prioritizes rebuilding the light soils his family farmed for over a century, while making a living.

Without off-farm jobs and income, Logan and his wife Brianna, and his parents Jeff and Connie Pribbeno, rely on what they reap from the soil to sustain their family and employees. They manage the 30,000 acres of crops, rangeland, and grazing lands at Wine Glass Ranch to be productive, progressive and profitable. The catchy name of their integrated farm and ranch is a nod to the wine glass shaped cattle brand that Logan’s great-great grandmother registered in the 1930s.

One example of how the Pribbenos have combined conservation with profitability is their use of “ecological edges” as habitat for beneficial insects. All 4,500 acres of their cropland is bordered with a mix of perennial, native grasses. Beneficial predator insects like lady beetles, flower flies, and tachinid flies thrive in these areas. When pests descend on crops, the predator bugs descend on them. By shifting the ranch’s insect ecology, broad-spectrum insecticides are never used.

The Pribbenos grow a diversified crop rotation of corn, millet, milo, and wheat to optimize soil fertility with crop residues. Minimum-till or no-till is used on all cropland. Over time, the Pribbenos have come to utilize cover crops not just a long-term regenerative practice, but a short-term profit center. They graze livestock on fields of cover crops and harvested crop residues on their own farm and on rented fields. Doing so puts money in their neighbors’ pockets while helping recycle nutrients. It’s a win-win for the local farm economy and soil community.

Since dividing 18,000 acres of Wine Glass Ranch into 90 paddocks in 1987, 120 stock tanks, 50 miles of pipeline, and more than 100 miles of cross fencing have been added to allow for high intensity, short duration grazing. Rather than trampling watering areas and over grazing pastures, a planned grazing system increases the vigor of their grasses thanks to increased rest periods for each paddock.

The Pribbenos continue to refine their system. Data from an annual evaluation of each paddock’s vegetation and soil type helps create the next grazing season’s herd size and moves. Proving that their system is working, Wine Glass Ranch’s stocking rates speak for themselves. Few graziers can keep as many as 3,000 beef cattle in a single group while regenerating the soil.

More than 10,000 trees and shrubs have been planted across Wine Glass Ranch to provide windbreak protection and wildlife habitat areas. A waterfowl pond was constructed, and four wildlife water guzzlers were installed to provide drinking water for wildlife.

In addition to 750 environmentally-sensitive acres enrolled in the Conservation Reserve Program (CRP), another 61 wetland sites on 107 acres have been enrolled into CRP wetland restoration and buffer strip programs.

Aldo Leopold defined conservation as the state of harmony between man and land. That harmony is found at Wine Glass Ranch, where the Pribbeno family’s deliberate management decisions are restoring, enhancing, and conserving their land. 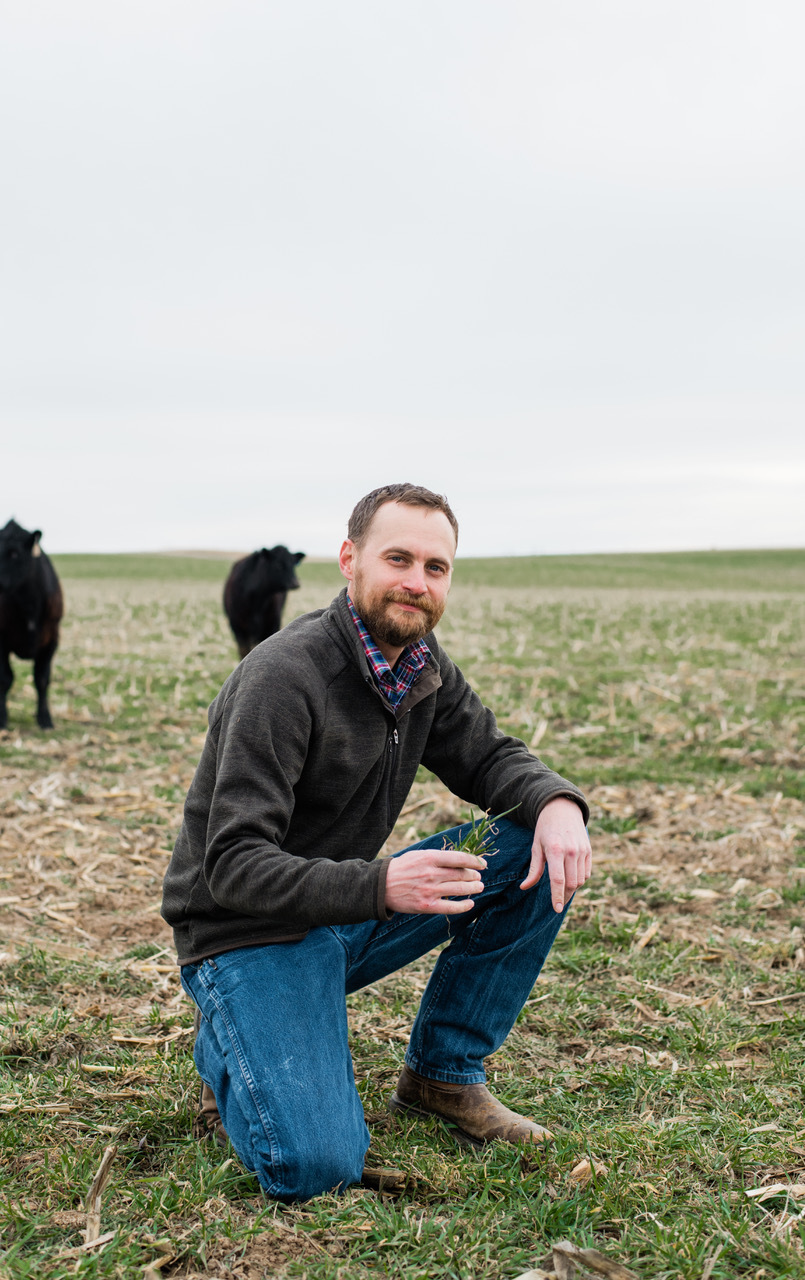 AFAN (Alliance for the Future of Agriculture in Nebraska) was formed in 2005 by the leading agricultural organizations in Nebraska to support and grow the livestock industry. Growing the livestock industry adds value to Nebraska’s abundant feedstuffs and creates economic opportunities on farms and ranches and in rural communities. AFAN provides one-on-one services to producers to help them understand opportunities, works with companies to help overcome challenges, and supports the recruitment of ag-based businesses. AFAN works with our partners to inform consumers about where their food comes from. Developing a vital rural economy is the overarching goal of AFAN. https://becomeafan.org.

CARGILL provides food, agriculture, financial and industrial products and services to the world. Together with farmers, customers, governments and communities, we help people thrive by applying our insights and 150 years of experience. We have 149,000 employees in 70 countries who are committed to feeding the world in a responsible way, reducing environmental impact and improving the communities where we live and work. We are passionate about our goal to be the global leader in nourishing people and operating responsibly across the agricultural, food, industrial and financial markets we serve. https://www.cargill.com/

THE NEBRASKA ENVIRONMENTAL TRUST was established in 1992 to conserve, enhance and restore the natural environments of Nebraska. It was created on the conviction that a prosperous future is dependent upon a sound natural environment and that Nebraskans could collectively achieve real progress on real environmental issues if seed money were provided. https://environmentaltrust.nebraska.gov/